This blog post was kindly written by Helen Matthews, Assistant Librarian (Periodicals) Nuffield College Library. She is also responsible for the rather fab photos. You can contact Helen via Twitter @helen_281.

Wednesday 2nd July saw an eager group arrive at Oxford Brookes University’s new library in Headington. The library opened in February 2014 and is located inside the university’s new John Henry building. Taking up 6,500m², the library holds a dominant place on campus. We were led to the library’s large staff room for tea and (delicious) cakes whilst we were given an introduction by Helen Workman (Director of Learning Resources & University Librarian). 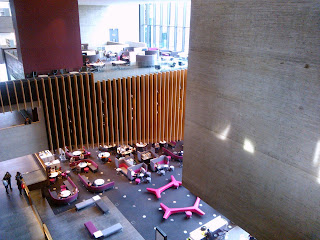 
The creation of the new library wasn’t without its issues. Because of neighbours living next door to the campus, the building lost a floor but gained a basement in return. The building was supposed to be ready to open in September 2013 in time for the new academic year but eventually opened in February. Opening in term-time meant that the old library had to be closed on a Friday as material was moved to the new library. Impressively, this was achieved in four days and the new library opened the following Wednesday.

Once we had finished devouring cake, the group was split into two and we were given tours by Jan Haynes (Head of Service Development and Delivery) and Dave Nolan (Head of Buildings Development). The immediate impression was of a large, light, airy, and open space with an atrium, called the Forum, which the library wraps around. Heading up to the fourth floor offers an excellent view of the Forum on the ground floor where there is a café and casual seating area. Here people were working independently and in groups, and using their laptops whilst consuming their purchases from the café.

The library houses 300,000 books, a collection that was weeded before being moved from the old library, and has 1,000 study spaces. There are student presentation rooms and group work spaces where the furniture is moveable to adapt to peoples’ needs. There are also coaching areas for taster sessions, a help zone for one-to-one assistance, training rooms, carrel-type desks for more independent study, a special collections reading room (which is still under construction), and an assistive technology suite. During the planning period, focus groups were held to find out what people wanted from the library space, which included testing furniture, as well as a wider consultation that included everybody in the university. 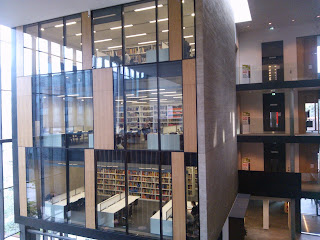 Although the library is complete (except for the special collections reading room), staff are still reviewing and making amendments. Because the space is so open and (some) of the furniture is moveable, they are able to change the layout of working spaces and adapt them to what people need. Similarly, the different noise zones are monitored and considered for change.

Visiting Oxford Brookes’ new library gave a sense of what a modern library should be. Returning to the library’s brief, they have been successful in creating an inspirational space. The architecture itself lends to this with the suspended lecture theatre and pink windows that bathe corridors in a soft light. The library has excellent facilities that meet the needs of the modern student and makes their experience rewarding. Attention to detail, like the frosted windows with microscopic cellular images, is a subtle touch that makes you feel like you are in a place that has been carefully constructed with the users’ in mind through every step of the building’s creation. Although signage is being revised and working areas monitored with the potential for change, this simply shows how library staff seek to continually improve the users’ experience and meet their requirements.

We were interested to learn that the library is open to anybody with no restrictions on who can walk in and consult its material, which helps to fulfil the library’s aim to provide easy access to information. Head counts reveal that use of the library is increasing, which shows that libraries are able to adapt to the modern world and that people still appreciate them.

This was an excellent trip with informative tour guides and I would encourage people to visit this new library. 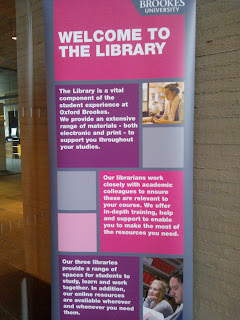