On the fifth of September 2019 our group went to visit Kedermister, a parish library attached to St Mary’s in Langley, Slough.


The entrance to the library is through the Kedermister family pew, which is quite a showpiece, with its marble-effect wooden structure. The impressively detailed paintwork continues through into the library itself. A mixture of Biblical figures and architectural flourishes greet you as you enter. As you enter this room you are standing in one of the few remaining, in-situ, parish libraries.

Our guide, honourary librarian Katie Flanagan, told us about the seventeenth century gentleman who founded the library. Almost all of the books were bought new by Sir John Kedermister and bound in a uniform style: brown calf with a double rule, raised bands on the spine, red sprinkled edges and the gilt armorial stamp of Sir John on both boards.

Our guide informed us that there was no surviving documentation that would indicate anything about Sir John’s collection policy – if he had one. There are a few probable conclusions that have been drawn. For example, all of the printed books, save one, were of a religious nature, which suggests that this is unlikely to be a personal collection of Sir John’s.

Sir John also didn’t seem to have a policy of rebinding secondhand volumes, for which we can all be grateful.

How did one go about finding things in this library? The original catalogue, or inventory, was revealed to us from behind a protective curtain: a manuscript on parchment dated “Aprill 1638”. It is a record of all volumes in the library; however, it is not available online. The only two volumes in the collection that are catalogued online are one manuscript on permanent loan to the British Library – an 11th century illuminated Gospels probably written in England before the Norman Conquest – and the collection's sole incunable, which is listed on the Incunabula Short Title Catalogue. This is notable for having every one of its references to the Pope crossed out.

It was not uncommon for wealthy book collectors to publish catalogues of their libraries but nothing of this sort ever existed for Kedermister as, before 1911, the only person who would have had regular access to the library would have been the vicar. The rather fine condition of the volumes speaks to this limited use. 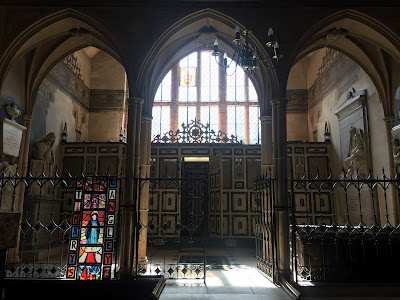 This was a thoroughly enjoyable, very informative visit. It truly is a well-hidden gem. There are no open weekends remaining this year, but it is certainly worth remembering for next year. Contact Katie on Twitter @KatieDFlanagan or by email here.