Must Keep Reading! Surviving the Carnegie and Kate Greenaway Judging by Elizabeth McDonald

The CILIP Carnegie and Kate Greenaway Medals are the UK’s oldest and most prestigious children’s book awards. Often described by authors and illustrators as ‘the one they want to win’ – they are the gold standard in children’s literature. The CILIP Carnegie Medal is awarded by children’s librarians for an outstanding book written in English for children and young people and the CILIP Kate Greenaway Medal is awarded by children’s librarians for a book for children and young people that is outstanding for its illustrations.

I had the privilege of being the South East Youth Libraries Group Judge in 2015 and 2016 and I am Young People and Families Outreach Manager: Library Localities, at Wokingham Borough Libraries. I am also a member of the Youth Libraries Group South East committee, which I have been for 12 years, and have held the roles of secretary, vice chair, chair; I was then given the opportunity to be the Carnegie and Kate Greenaway Regional Judge.

All of the books that are nominated are deemed to fit the very strict Carnegie and Kate Greenaway criteria. Anyone who is a member of CILIP can nominate and each authority and regional group has the opportunity to submit an entry as well. As a regional group – Youth Libraries Group South East – we organise a regional day every year; this year’s will be September 25 at Crawley Library.
Each year the nominations list is filled with varied and interesting reads that cover all sorts of issues and adventures, I personally found that it stretched me to explore new genres that I would not normally read.

My first challenge as a CKG judge was to read this great list of books for the first time. ​It was intensely exciting when the parcels arrived at my library, and all the lovely shiny new books started to pile up. When I brought the books home and stacked them all up my six year old son counted how many there were. 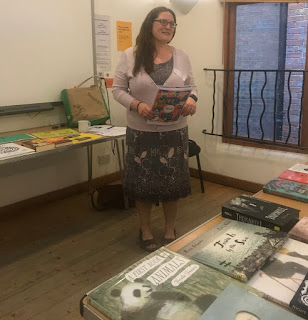 I began the task of reading and critiquing each book. My son would count each day, to see how many books I had left to read. ​I just kept thinking, “I ​must keep reading, I must keep reading!”  Keeping up the reading momentum in the short space of time available was helped by encouragement and support from colleagues, friends and family, and my son’s daily countdown. It was essential to read everywhere, during lunchtimes, in the car and at the park! – “I must keep reading!”

​It was amazing to explore some of the titles with my son. He adored a lot of the ones we shared and I have had to buy another bookcase! Some of them really captured his imagination – he wanted to be an explorer in space and the Antarctic, then laughed at bird thieves and a funny squashed frog! (Oi Frog! By Kes Gray and Jim Field is undoubtedly one of the best picture books ever.)

As a judge you also have to promote and raise awareness of the Carnegie and Greenaway awards and encourage participation in ‘shadowing’ groups. Promoting the books through these schemes has been amazing, and hearing young people’s opinions is wonderful.

To explain, children and young people ‘shadow’ the judging process for both awards; they read, discuss and review the books on each shortlist selected by CILIP’s panel of librarian judges and engage in reading related activity online. The scheme has thousands of registered reading groups across the UK and internationally – engaging tens of thousands of children and young people in reading.

Reading activity takes place from March to June – from the moment that the shortlists are revealed to the final winner’s announcement. The shadowing process is supported online. More information can be found here.

I visited shadowing groups across the South in Berkshire, Hampshire and Surrey, in schools and libraries. We were able to organise one of the shortlisted authors, Geraldine McCaughrean (The Middle of Nowhere), to come and talk to several of our secondary school students and shadowing groups. I am currently working with my local Adolescent Unit, Willow Hospital Education at Wokingham Hospital, to shadow the 2018 prize for the Kate Greenaway Books. Talking to fellow book lovers about the shortlisted books and the judging process has been really enjoyable. It was brilliant to have the opportunity to talk about books so much!

Moving onto the judging process, we had an amazing discussion on each of the books nominated. When it came to making decisions, there were lots of heated debates, outcries of despair, near-tears and a bit of laughter thrown in too. Revisiting the shortlisted books has been quite a different experience; going away and re-reading and re-reading (must keep reading!), so you can completely justify how each of the books stands up to the criteria. During this process it starts to become more obvious which books stood out that little bit more. Even if you have decided which book you adore and think should win the prize, you have got to make sure that the criteria are fully met.
This is where heartache comes – you are passionate about which book should be the winner, but the more you consider and talk about the text and images with the other judges, the more it becomes clear who the winner has to be. I’ve really enjoyed the debating and banter of exploring and defending the books.

The winner of CILIP Carnegie 2015 prize was Tanya Landman for Buffalo Soldier – Charley, a young African-American slave from the deep South, is freed at the end of the American civil war. However, her freedom is met with tragedy after her adopted mother is raped and lynched at the hands of a mob, and Charley finds herself alone with no protection. In a terrifyingly lawless land, where the colour of a person’s skin can bring violent death, Charley disguises herself as a man and joins the army. Trapped in a world of injustice and inequality, it’s only when Charley is posted to Apache territory to fight “savage Indians” that she begins to learn about who she is and what it is to be truly free.

The winner of CILIP Kate Greenaway 2015 prize was Will Grill for Shackleton’s Journey – In the last days of the heroic age of exploration, Ernest Shackleton dreamed of crossing the frozen heart of Antarctica; a place of ferocious seas, uncharted mountains and bone-chilling cold. But when his ship, the Endurance, became trapped in the deadly grip of the ice, Shackleton’s dreams of crossing Antarctica were shattered. Stranded in a cold, white world, and thousands of miles from home, the men of the expedition set out on a desperate trek across the ice in search of rescue.

The winner of CILIP Carnegie 2016 was One by Sarah Crossan – Grace and Tippi are conjoined twins. And their lives are about to change. No longer able to afford homeschooling, they must venture into the world – a world of stares, sneers and cruelty. Will they find more than that at school? Can they find real friends? And what about love? But what neither Grace nor Tippi realises is that a heart-wrenching decision lies ahead. A decision that could tear them apart. One that will change their lives even more than they ever imagined.

The winner of CILIP Kate Greenaway Medal 2016 was The Sleeper and the Spindle, illustrated by Chris Riddell, written by Neil Gaiman – On the eve of her wedding, a young queen sets out to rescue a princess from an enchantment. She casts aside her fine wedding clothes, takes her chain mail and sword and follows her brave dwarf retainers into the tunnels under the mountain towards the sleeping kingdom. This queen will decide her own future – and the princess who needs rescuing is not quite what she seems. Twisting together the familiar and the new, this perfectly delicious, captivating and darkly funny tale shows its creators at the peak of their talents.

Amnesty also provides human rights education resources for every shortlisted book, which both Amnesty and CILIP will promote to schools via CILIP’s existing school shadowing scheme and Amnesty’s TeachRights network.

The First Amnesty CILIP Honour medals went to Robin Talley for Lies We Tell Ourselves, which the judges called “an exciting page-turner of a book, it vividly brings to life the human cost of prejudice and explores an historic battle for equal access to education.” The Amnesty CILIP Honour for the Kate Greenaway Medal shortlist went to Ross Collins for There’s a Bear on My Chair, a book which, according to the judges, is “packed full of joyous humour: it develops children’s empathy and shows how we can protest creatively and peacefully when something is wrong.”

The meeting then shared the 2018 shortlist and discussed the books that people had read. Everyone was looking forward to finding out the winners at the announcement for this year’s prize on June 18.
Questions were asked on the age ranges of the books and how this could work with shadowing, the Amnesty prize and a book chat about new books that have been read and shared that maybe suitable for the 2019 prize.

Don’t forget that as a CILIP member you can join your regional committees – they are always looking for new members to support regional activities – more information here.