On 20th July, CILIP TV ran a visit with CILIP Library and Information History Group (@CILIP_LIHG) to see a choice of Oxford College libraries. Alefiyah Oakford has kindly written an excellent summary of the afternoon with fab photos by Tasneem Hassanali:

Our tour of the Oxford Libraries took place on a warm, sunny Monday afternoon. There was a good turnout which included many budding photographers!
We had a choice of attending Queen’s College Library or Merton College Library for the first part of the tour.  I decided to choose Queen’s College Library as I thought it would be interesting to see and find out more about the recent refurbishments.
Queen’s College Library
Queen’s College Library is often described as ‘one of the most beautiful Baroque buildings in Oxford’* and we certainly were not disappointed on our tour of the Upper Library which was built between 1692-1695.  The refurbishment project took place between 2013-2014, not only was this essential to preserve the historic aspects of the building and its contents but also to improve conditions for the library’s users.
The ceiling plasterwork in the library was amazing.  We learnt how during its refurbishment a birdcage scaffold was erected so it could be intricately cleaned.  UV filtering blinds were installed to protect from light damage and, to modernise the library, new wiring, lighting, heating and ventilation was installed.
We also had the opportunity to view the impressive statute of Queen Philippa (the College founderess) and the globe set, which was refurbished in 2002, with globe cases created in 2007 to help conserve the globes, as well as the beautiful English Orrery which reproduces the movements of the planets. 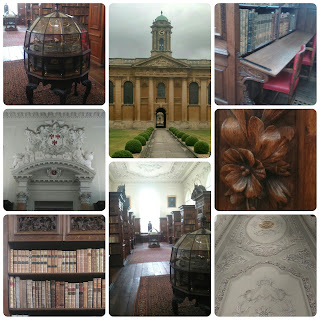 Magdalen College Library
The next part of the tour took us to the Old Library at Magdalen College which was built with the College in the 1470s.  The tour covered the history of the library and gifts bequeathed to the library.  We were guided around various exhibitions that aimed to examine the libraries of a range of people and what their bequeathed books tell us about them and about society at that time.
The impressive exhibitions included that of William Waynflete (founder of Magdalen College), Thomas à Becket, John Fitzwilliam, Thomas Wolsey and Olga and Jack Levinson – to name but a few!
Perhaps one of the most exciting items we were shown were fragments of possibly the earliest known New Testament (possibly the oldest book!) which had been found in Egypt and sent back to the library.
We also had the chance to visit the atmospheric Magdalen College Chapel and viewed  a copy of ‘The Last Supper’ painting which is believed to be painted by Giovan Pietro Rizzoli known as Giampietrino, a pupil of Leonardo da Vinci. 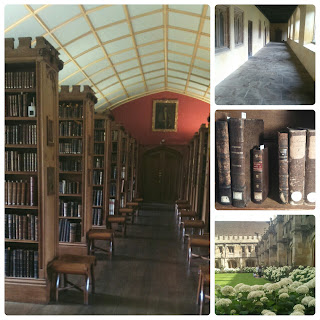 
The last leg of our tour took us to the Kathleen Major Library at St. Hilda’s College.  This light and airy library was built in 1935 so provided a sharp contrast to the two previous libraries we had visited.  During the tour we learnt about the history of the library and its collection.  The library felt very welcoming and overlooks the River Cherwell.  The library is spread over three floors with several reading rooms and we had the opportunity to wander through the library building and examine its collection.


A timeline was on display which showed ‘The History of St. Hilda’s College Library’ from 1893-2004.  It was extremely informative and useful in showing how much things have now changed. 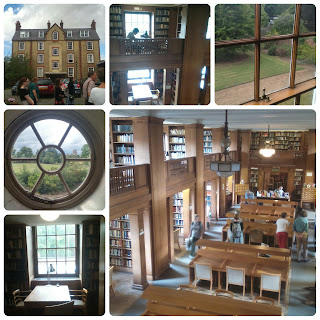 I thoroughly enjoyed the Oxford College Libraries tour, especially seeing three very different libraries and the changes that have taken place over the history of these libraries.  What made the event so memorable and interesting were the knowledgeable insights provided by the guides and librarians who were able to tell us lots of interesting facts and stories about these wonderful libraries.  A huge thank you to them and also to Sonja from CILIP TV and Erika from CILIP LIHG for organising this great event!
Alefiyah Oakford BSc (Hons), MA, MCILIP