On the evening of 2nd April 2014, the good folks of Library-land (Thames Valley side) gathered to find out more about the changes to CILIP's Professional Registration Event, and also to experience the wonders of our Annual General Meeting. Mainly involving cake.

The first order of business was the AGM, the key points of which are outlined below. The minutes of the last year's meeting were approved. The Chair reported the financial status of the committee, which is fairly healthy. One of the events coordinators reported the various events organised by the committee. These events were well attended. The number of attendees was stable throughout the year with on average 15-20 attendees. Crucially, the event coordinator indicated that the committee is always welcome to receive members’ suggestions and input for future events: so please send in your suggestions!

The social media coordinator reported that the committee’s social media platforms continue to grow steadily. The social media coordinator aims to develop the blog in the following year and encourages any guest posts on future events. A great idea that came out of the AGM was to host guest writers contributing posts on a day in the life of their library. Always keen to bolster contribution, please do contact me if you'd like to do this- or any other guest post: remember you can use this in your portfolio as proof of professional engagement!

The Chair presented the new CILIP TV Committee for 2014, a list of which can be found on the CILIP website. It should be noted that we are a friendly lot, and always happy to accept new recruits!

The Chair spoke about the New Regional Network, the new name for CILIP Branches.  As for 1st April, the Regional Network will be a merger of the regional branches with the CDG groups. The Chair invited everyone to check the CILIP website for more information. The Chair also stated that two roles (candidate support office and communications coordinator) need to be filed in the South East region and invite anyone interested to join to get in touch. 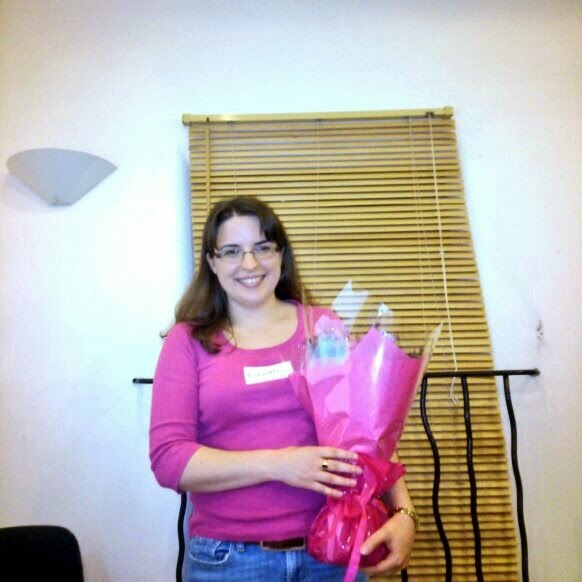 Elizabeth Schlackman, our outgoing Chair was then presented with a lovely bouquet of flowers (see picture) by the new Chair as a thank you for all of her hard work over the time she has served on the committee. It has been a real pleasure to work with Elizabeth- I have had the privilege of working with her on committee and professionally and have seen first-hand her commitment and passion for the profession. I am sure that we all wish her the best of luck as she returns to America.

We then had a brief break to allow everyone to refuel with tea, coffee, and the all-important cake.

A word on the Governance Review

We then welcomed the President of CILIP, Barbara Band, who was quick to stress that CILIP had learnt lessons from the failed re-branding exercise, and feel that they must make the effort to become more transparent and effective- at one point 70 people sat on the Council, which seems slightly unwieldy.

Phil Bradley has led a review board for two years, and the results are now the hope is that the structure of CILIP will be more streamlined and efficient, whilst still maintaining the legal framework required by CILIP's status as a charity.

More details of the Governance Review can be found on the CILIP website, and I would recommend all CILIP members should spend the time reviewing this- especially as your views are currently being sought on the proposals. Consultation is ongoing until July 2014, then there will be a vote on the proposals at the AGM in September.

The main aim seems to be to produce streamlined committees. The Policy Committee is to be given higher priority, and there will be an increased chance to progress to higher level within CILIP from the grassroot's activism which is so valuable. CILIP should become a more open organisation, which is member-driven: which is what people have been calling for, and it seems like CILIP have listened to it's members- so this seems positive.

The new Professional Knowledge and Skills Base will be crucial to success: it can be used as a tool to help identify gaps and used as the PDPP.

Members will be expected to revalidate every year, which has been a concern for me, but I was reassured that this will be simpler- consisting of only 20 hours of CPD, 250 words with no supporting evidence, logged on the new CILIP VLE and that it would be free: so now I am completely convinced (given I do well over 20 hours of CPD and already have a log of sorts...). Check back next year to see if I've got around to it...

I was also comforted that those who have Chartered and Revalidated under the new system so far have done OK. The whole aim now seems to have moved toward supporting people in their continual development. Although, it was stressed that the standards of Chartership- the gold standard- is already set and will not be relaxed.

More information on the changes is on the CILIP website, so again, I would strongly recommend that you check this out.

The meeting closed with offerings of yet more cake! A lot of important changes are in process at present, so this has been a huge post- hopefully it has covered the main issues and given you some idea of what is going on.
Posted by CILIPTV at 23:02